EDDIE IZZARD (comedian and actor) said of Ukelilli, "Well, I knew I'd made it when a woman called Ukulele-lilli [sic] wrote a song about me on ukulele, which is really weird, and I thought, 'Well, that's making it.'" -Eddie Izzard, "Live from London: Eddie Izzard" ( Hear the clip and listen to the song "Eddie Izzard" on the video below)

SIMON PEGG (star and co-writer of SHAUN OF THE DEAD and HOT FUZZ, and "Scotty" from STAR TREK) calls Ukelilli's tunes, "...Some sharp funny, charming and devilishly catchy ukelelism. She's up there with the two Georges (Formby and Harrison) for championing the diminutive guitar and I thoroughly recommend her." 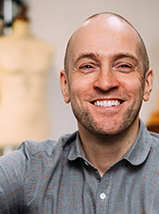 DERREN BROWN (magician/psychological trickster/master showman) has called Ukelilli's song about him "by far the most beautiful song I've ever heard." 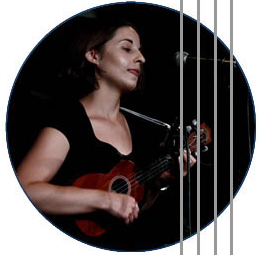 Ukelilli is a singer-songwriter with a comedy/folk/pop sensibility, hailing from the D.C. suburb of Chevy Chase (named not after the comedian, but after a town in England, so called as it was known for its fox runs, or "cheviot chases"). Now living in Western Massachusetts, Ukelilli has been building a passionate cult following thanks to her adorable persona and quirky repertoire of songs. At a Ukelilli show you're likely to hear everything from a punk ukulele anthem, to an ode to the films of Jean-Claude Van Damme, to a twisted loved song called "I Love You So Much (I'd Prefer It If You Were Not Dead)."

In addition to being shouted-out by some of her idols, her music video, "Vote for Obama," was a YouTube viral hit in the 2010 election. (Obama has so far declined to comment on Ukelilli, but Washington scuttlebutt has it he's a fan.) She has played in clubs all over LA, including a monthly gig at El Cid, one of the coolest venues in Silverlake, and she was a special guest of The Ukulady on the Hippodrome Shuttle, which tours Downtown ArtWalk LA. Ukelilli has an international fanbase and has toured the UK, including playing the Ukelear Meltdown in Newcastle.

Her music has been featured on the soundtrack of a Zappos commercial, the international festival-winning short film Cracks, indie feature Natural Victims, and the "Intern Journal" on The Life Aquatic with Steve Zissou DVD. Ukelilli has recorded 7 albums, 4 of which are currently available through iTunes, Amazon Music, and Spotify.